I said I got to test TWO patterns for Issue 11 of One Thimble (affiliate link), didn’t I? These ridiculous little critters are actually the third pattern I’ve tested for Stephanie Woodson of SwoodsonSays, and will be available 13May16 (I’ll link when it’s live). First it was the Dump Truck Pillow which is in HEAVY use at my house. 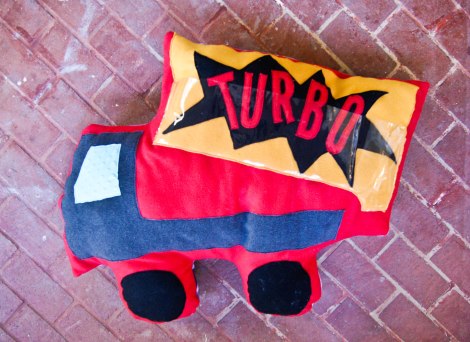 I made a TurboHaul Pillow in honor of my good friend who launched this company in DC many years ago.

Then it was the Adventure Flags (affiliate link) – mentioned in my last post, but here are a few more pictures.

The goats have moved back into my living room, but still proudly wear their pennants.

I love ALL of the neat designs in this pattern!

So when Stephanie asked me to test these softies to be released in One Thimble’s Issue 11, it was a no-brainer. Her testing process is pretty informal; the patterns are straightforward, quick sew, and it’s a nice break from the more intense sewing I’m usually doing. I really like that Stephanie encourages all sorts of feedback, and lets me get a little creative with my interpretations as well. Thus, my fox wears glasses to match James, and I used the selvage from a scuba knit to make sleepy little eyelashes for my sloth, instead of eyes. I appliqued on all the eyeballs and noses rather than safety eyes and noses, and did the mouths using my sewing machine. This girl is too lazy to hand embroider. I also used upcycled materials whenever possible. 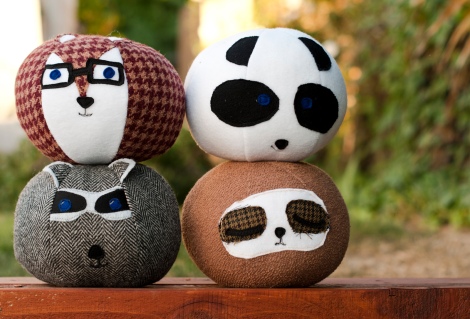 Seriously, how cute are these things?

James really loves playing with them, and finds it impossible to pick just one to take with him somewhere. Here is a sample conversation.

Me: James, it’s time to go. Do you want to bring one of your critters with you in the car?

Me: Pick ONE please, then lets go.

James: (stands in front of them all lined up; picks up the sloth and runs over to me). Here go Mommy. You carry this.

James: (runs back to the other 3, picks up the fox, runs back to me) Here go mommy. You carry this.

Me: No James, just one please. We need to leave now.

James: OK. (runs back to the other 2, gathers both in his arms, runs back to me). OK. Yes. (realizes his arms are full and he can’t also carry his water bottle). Here go mommy. You carry this.

We go through this probably twice a day, if not more. 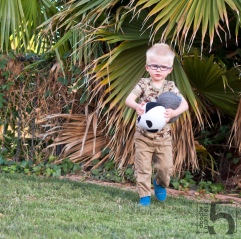 I did the ears on the Raccoon wrong- they should be appliqued down like the Fox, but they are handy for carrying around and fidgeting with.

See? Sloth just GETS it.

I Love Your Style: How to Define and Refine Your Personal Style by Amanda Brooks High Style: Masterworks from the Brooklyn Museum Costume Collection at The Metropolitan Museum of Art by Jan Reeder Corsets: Historical Patterns and Techniques by Jill Salen Amy Vanderbilt's Complete Book of Etiquette: A Guide to Gracious Living by Amy Vanderbilt
Loading Comments...
Comment
×
<span>%d</span> bloggers like this: