I’ve been trying to ease back on my pattern testing so I can work on some other projects over the spring and summer, but when Tami at Love Notions posted the previews of the Tidal Tank and Dress I applied to test and crossed my fingers! I initially thought that it was a paneled front with a separate back piece, but it turns out the pattern features a front panel and a wrap-around back piece that forms princess seams in the front. It is SO pretty and flattering. The wrap-around feature made perfecting the armscye area a little tricky, and Tami worked hard to make sure the final pattern fit well, is flattering from all angles, AND covers your bra straps, even in the tank version.

Here’s a quick run-down of the pattern details:

Because of the wrap-around back piece, sewing the side seams can be a little tricky- there is some easing required between the top of the side seam and the notch. Line up the top of the two pieces, and pin there and at the notch, and gently stretch to make the lengths even. This is explained and illustrated in the pattern, but it still could feel a little wonky if you pin from the bottom-up.

I made four versions during testing and I really liked all of them! The first was used a mix of poly blend ITYs; second was a poly/ spandex from Zenith and Quasar; third (pictured) used plaid cotton-lycra from Piccadilly Textile Corp as the front panel and a black rayon spandex blend on the back; final was white ponte with black piping. I used binding on the neck and arms of all versions because I prefer the more narrow finish it provides over bands. I made a size small based on my high bust (33.5″), no full bust adjustment (FBA) and graded out to a medium below the notch to give my hips a little extra space. I shortened by 1″ at the shorten line, then added the inch back just above the hem. Why would I do that if the overall length remains the same? I have a short torso which means my hips start higher than the pattern grades out to accomodate them. By shortening the pattern near the waist, it makes the pattern and my hips meet in the same place. But I didn’t want to lose any overall length in the pattern, so I put the inch back on at the bottom.

I really love how the plaid looks with the solid black (and my red capris!!), and feel a little bit like Gwen Stefani, only not as cool. As always, Maggie did an amazing job with pictures. 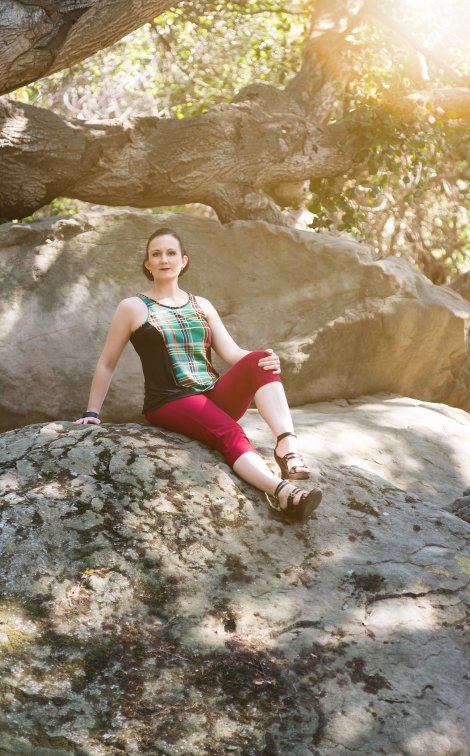 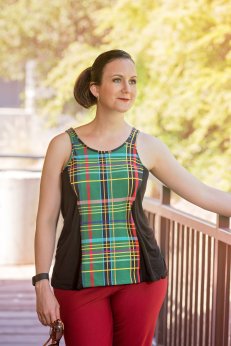 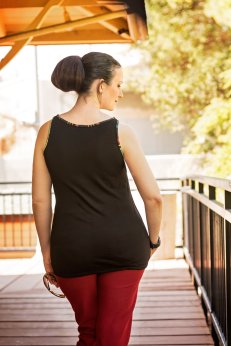 Do you LOVE my plaid? I hope so because you’re going to be seeing a lot more really great fabrics here coming out of Piccadilly. Amber Loschert and Remy Shand are the designers and hosts of this custom knit group and they have some awesome things coming down the pipeline. They just invited me to help admin their Facebook group (I’m probably the only person in the world excited about being granted admin/ moderator status), host monthly sewalongs, and help sew up strike-offs. This pattern is going to be our first sewalong, so if you’re thinking about making it, go get your copy while it’s on sale, then join the Piccadilly group for the Sewalong. We’ll include help with fitting, lots of inspiration and pattern hacks, and prizes for three random participants.

I Love Your Style: How to Define and Refine Your Personal Style by Amanda Brooks High Style: Masterworks from the Brooklyn Museum Costume Collection at The Metropolitan Museum of Art by Jan Reeder Corsets: Historical Patterns and Techniques by Jill Salen Amy Vanderbilt's Complete Book of Etiquette: A Guide to Gracious Living by Amy Vanderbilt
Loading Comments...
Comment
×
%d bloggers like this: